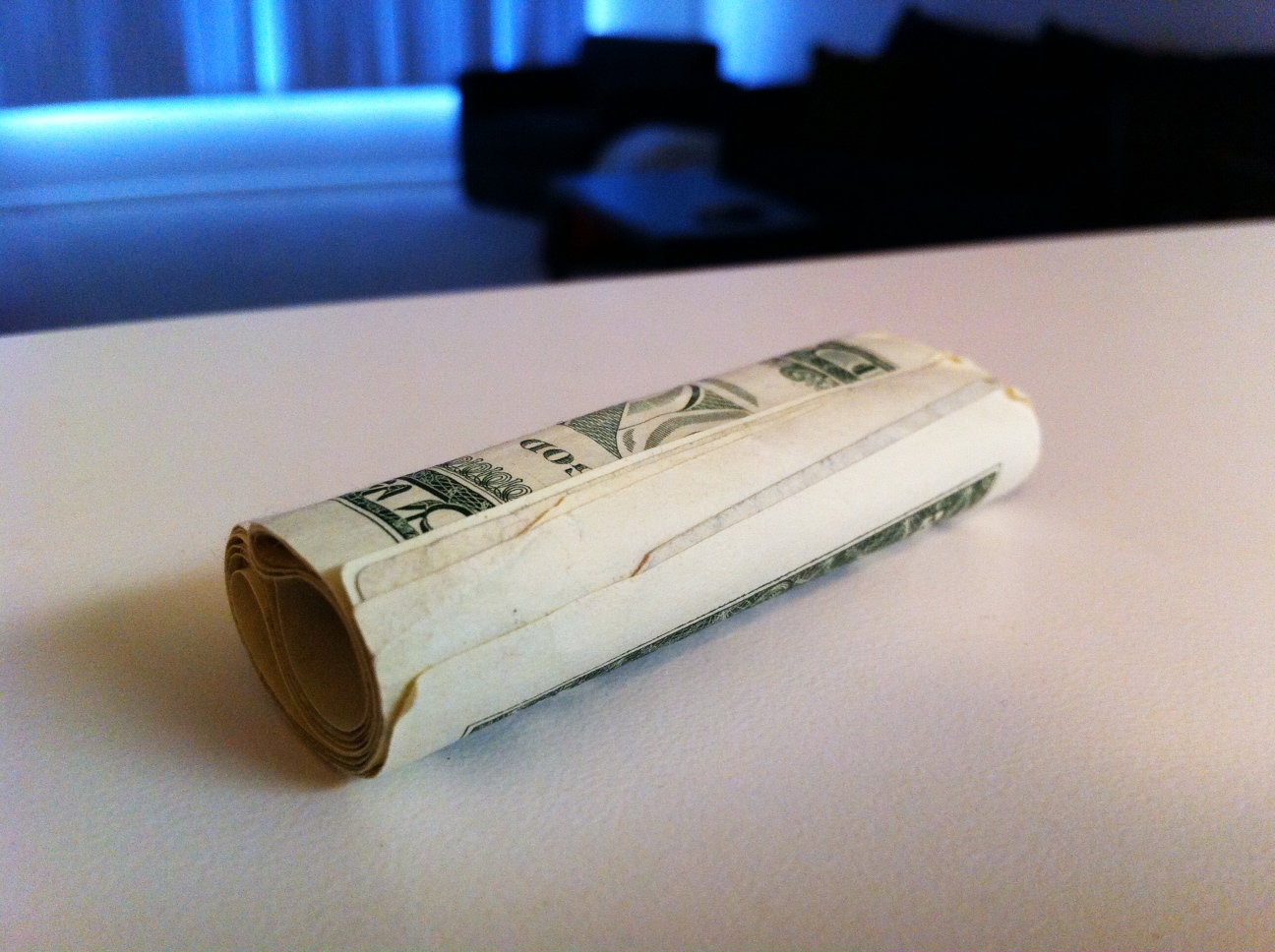 This is a view of rolled-up bills I found in the pocket of my pants this morning when I went to iron them before work.  I swear I don’t have a cocaine problem.

This bugged me out for a few seconds.  I am usually very good about keeping track of my cash.  I’m slightly OCD about certain things in my life; how I carry my cash is one of those things.  All of my bills have to be right side up, facing in the same direction, then neatly folded in half before going either in my pocket or in my money clip.  I moved to the clip last year at the suggestions of some friends.  Wallets just got too bulky as I learned from George Costanza.  The clip is much neater and fits nicely in the front pocket.

Whether I have a clip, wallet, satchel, fanny pack, back pack or man purse, I never leave money in my pocket once I take my pants off.   Ever.  If I knew I had done that, I would have stopped whatever I was doing just to take the money out.  Well, I might not have stopped eating, or drinking a beer, or making schnick-schnack, but I probably would have taken pause with any other activity I was involved with to put my money in its right place.  If you’re wondering if I really eat or drink without pants on…I live by myself 3 to 4 days a week.  The no-pants-required rule is a nice little perk.  Phil Collins didn’t require a jacket, I don’t require pants.  Su-su-sudio.

Not remembering that I left money in my pocket, combined with the fact that I found the bills rolled up as shown, made me wonder what the fuck happened to me?  Did I have a night out that I can’t remember?  Did I hook up with some strippers and local un-desirables and have a night of debauchery and bacchanalia?  Did we go to a club, demand our own VIP section and 12 bottles of Grey Goose?  Did I kick the DJ out, then rock the house by mixing prime cuts from Paul’s Boutique by the Beastie Boys with songs from Slanted and Enchanted by Pavement?  Did the strippers let me snort blow off their asses with bills that I then put in the pocket of my work khakis and forget to take out when I got back to my apartment?  That must be what happened.  There’s no other explanation.

If you look closely at the rolled-up stack, you’ll see there’s four bills.  I got a little excited after I took the picture, thinking that there could be a nice surprise here.  Maybe there’s a $20 bill in here, maybe even a $100 bill.  Hell, I’d take a $10 bill.  I unrolled the bills and had just a touch of that excitement I used to get on Christmas morning when the anticipation of opening a gift makes you giddy and gets your heart rate up a bit.  And there it was…a grand total of four $1 bills.  They must have been from the strippers.