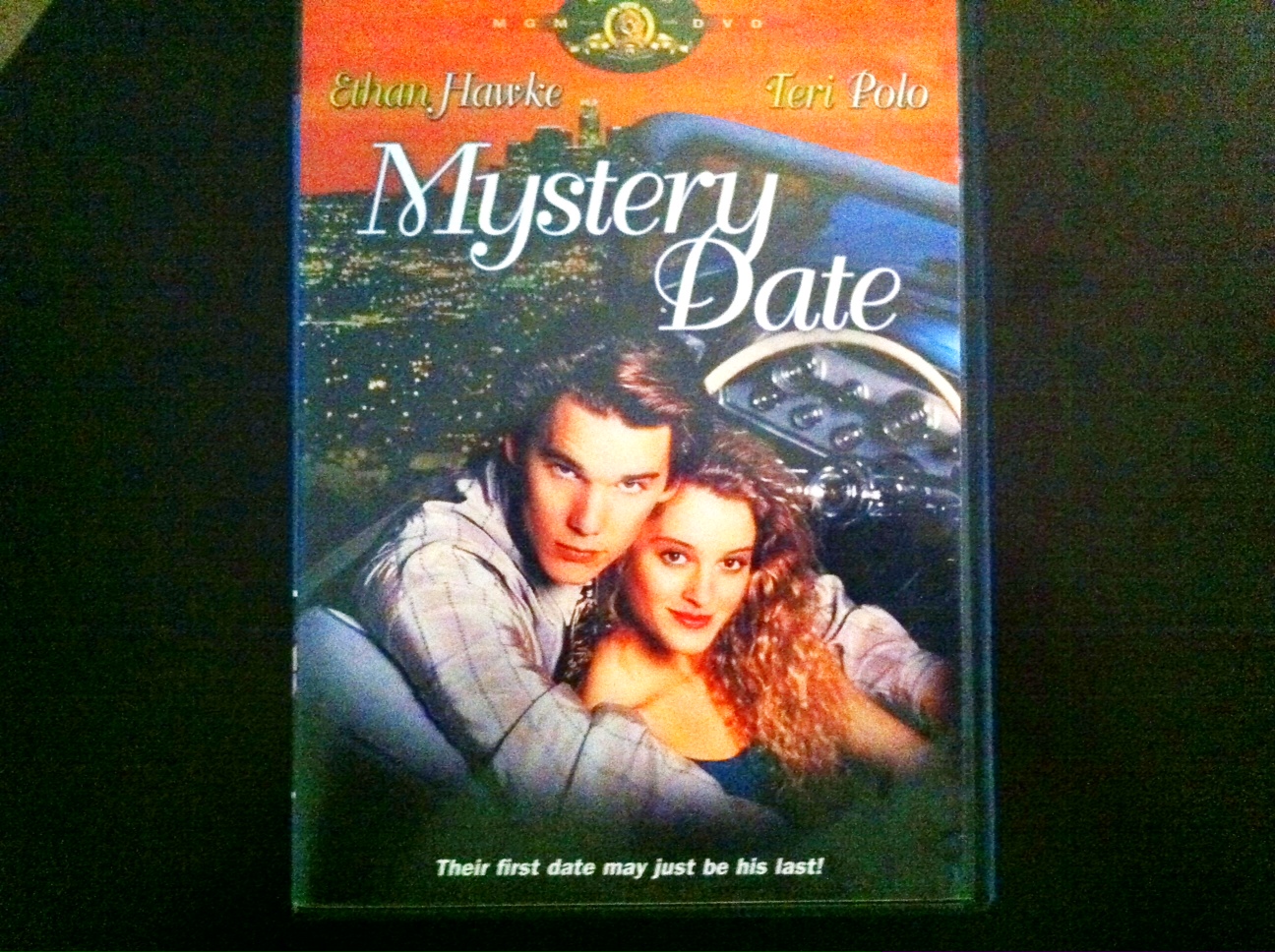 This is a view of a DVD of, quite possibly, my favorite Guilty Pleasure movie.  I’m embarrassed to even type that sentence.  It has been sitting in my apartment and it caught my eye a few minutes ago.  Yes, Mystery Date, the long-forgotten semi-dark romantic comedy from 1991, has always held a special place in my heart and I have a hard time figuring out why.

The movie stars Ethan Hawke, who is better known for Dead Poets Society, Before Sunrise, and Training Day or, back in the day, with a young River Phoenix, in Explorers.  His love interest is played by Teri Polo, who went on to star in the Meet the Parents/Fockers/Little Fockers movies as Ben Stiller’s wife.  I’m sure if you asked either one of them, they would not consider Mystery Date as the pinnacle of their career.

I’m what I’d consider to be a fairly big movie fan.  I have a tremendous amount of respect for the art form, have studied it in some detail, and feel I have a pretty good working knowledge of the finer examples of cinematic excellence, both critically and commercially.  Yet, I can’t find any rational explanation for why I like this movie.  I’ve probably watched it 200 times.  The acting is stilted; the cinematography is amateurish at best; the writing, which I feel was probably edgy when first written, was watered down by suspect direction and editing.

The soundtrack is the one true stroke of genius which makes me think the music supervisor and writers had a different view of the movie than the editor and director.  Here are some of the songs from the soundtrack:

“Crazy” by Seal: One of my favorite pop songs from the 90’s.  My brother used a line from this in his toast at my wedding.

“Suicide Blonde”, “Disappear”, and “On My Way” by INXS: All very good songs.

“The Horror of YG” by GWAR: Daaaaaaaaaamn.  And they played this in a club scene in the movie.  Check out GWAR on Youtube, I dare you.

“Funky Cold Medina” by Tone Loc: A song of the times.  And that time was 20 years ago.

“Tunic (Song for Karen)” by Sonic Youth:  The jewel of the bunch.  This song is so out of place in this film, that it makes their decision to use it that much more endearing.  It’s used during a chase scene in the movie.  There are 1o billion songs that would be more appropriate than this song in this scene, but they used Sonic Youth and a song from the Goo album.  It’s so out of left field, I love it.

All of this still doesn’t answer why I like Mystery Date.  And I really don’t know if I have an answer other than this…I watched this movie for the first time at a certain point in my life where it just seemed to resonate and it’s now become a permanent part of my cinematic profile.  It instantly created a memory, a feeling, if you will, that’s inexplicably lasted for 20 years.  You can’t really explain these things, you just have to accept them.