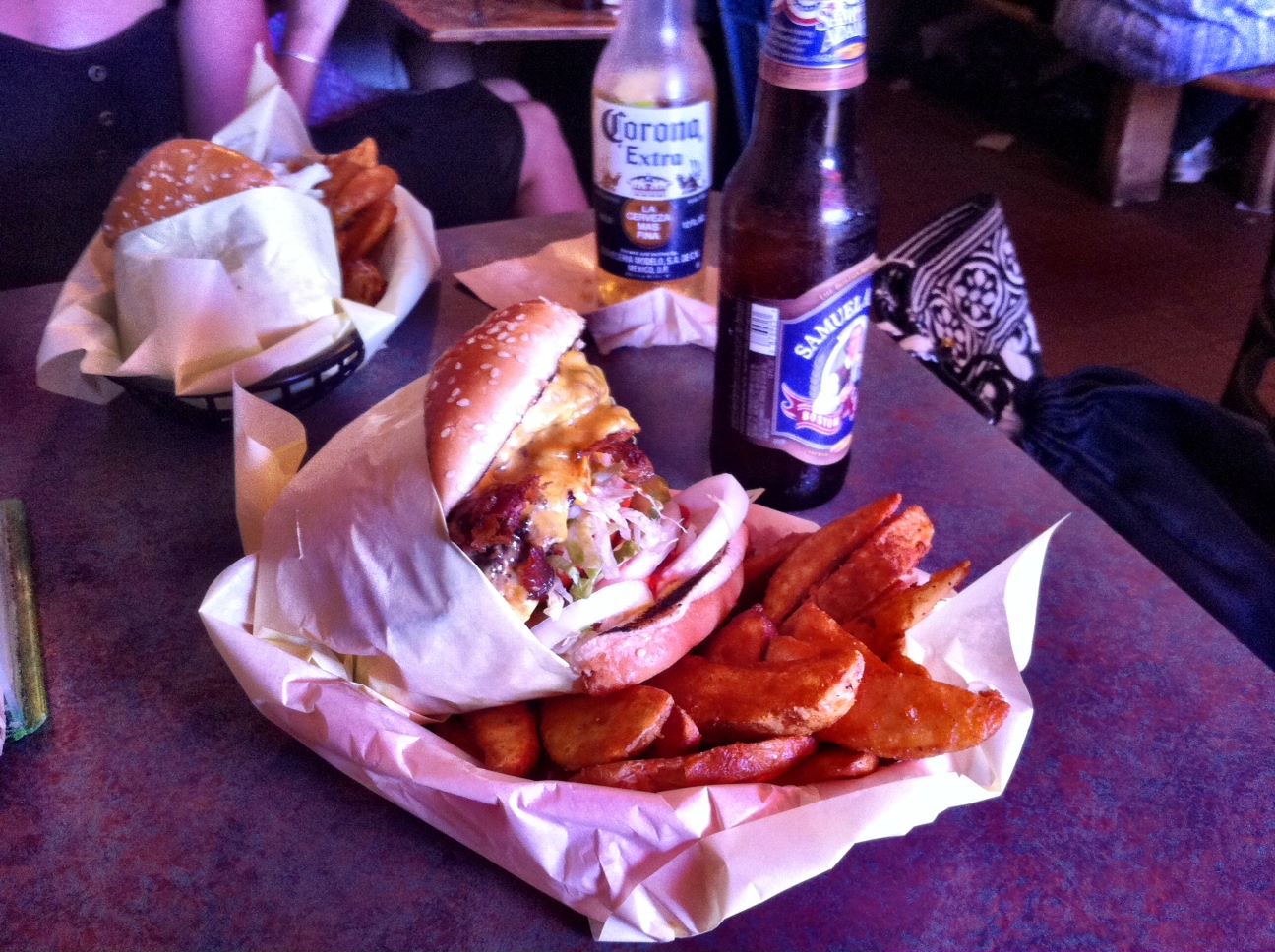 This is a view of a Bacon Double Cheeseburger Basket from Hodad’s in San Diego, CA (Ocean Beach, to be more specific) that I devoured yesterday.  If there were a contest to determine the best burger in America where I was judge and jury, there would be no doubt.  Hodad’s would be crowned King Meat.  Sorry McDonald’s.

I have been eating here as often as possible since 1995 and never have I walked away hungry and sad.  Instead, I walk away with a meat high and the memory of good people, killer music, and one-of-a-kind scenery.

The legendary status that Hodad’s has, in my family alone, is without precedent.  Every restaurant we eat in, no matter where we are, inevitably gets compared to Hodad’s.  My wife and I crave their burgers often.  My oldest daughter, who accompanied us on all of our earlier visits, still reminisces about sitting in the VW bus all by herself.  My younger daughter was 2 when we moved back to New York, but to hear her talk about it is to think that she’s a lifer.  My son, who is 8, went one time and the way he talks about the place with such reverence, makes you think he’s eaten there every week of his young life.

The Bacon Double Cheeseburger you see before you is as big as a shot put and weighs almost as much.  I’m not capable of unhinging my jaw like a snake, so it is impossible to eat this burger straight on.  You have to either eat it like an apple, or take a section out of the middle, like the tomatoes, for instance.  That allows you to eat it more like a traditional hamburger.  Some may call that cheating; I call it survival.

This is not a chain burger. Oh no.  This is two big slabs of meat perfectly cooked and topped with cheese, lettuce, tomato, onions, ketchup, mustard, and a heaping helping of bacon that tastes unlike any bacon I’ve ever put in my mouth.  It’s like a separate crunchy patty of pork fat that adds just a touch of heaven to the taste portfolio.  Each Hodad’s burger is like a beautiful little snowflake.  They may all look and taste the same, but each one is a bit different when you peer closer, wrap your mitts around this coronary trigger, and sink your teeth into nirvana.  But, unlike a falling snowflake, you don’t want to stick your tongue out to catch one of these lest you enjoy getting punched in the face.

This burger experience isn’t complete without a word or three on the ambiance.  It is a true, authentic shrine to the surfing culture.  License plates from around the world line the walls and fight for position with surf memorabilia.  Posters for local bands and performers blend in with old-school shrines to local Ocean Beach legends.  A loud, eclectic music selection is chosen by the staff without concern for people’s eardrums or musical taste.  It’s just the best.

No trip back to San Diego for me will ever be complete without a visit here.  And, if you’re ever in the area, hang out in Ocean Beach for a bit after your burger.  The town is permanently stuck in 1969, the same year Hodad’s opened, so be careful.  When you see the local establishments and the townsfolk as you walk down Newport Avenue, you’ll think someone drugged your meat.  The meat is fine, but believe me, you are not in Kansas anymore, Toto.