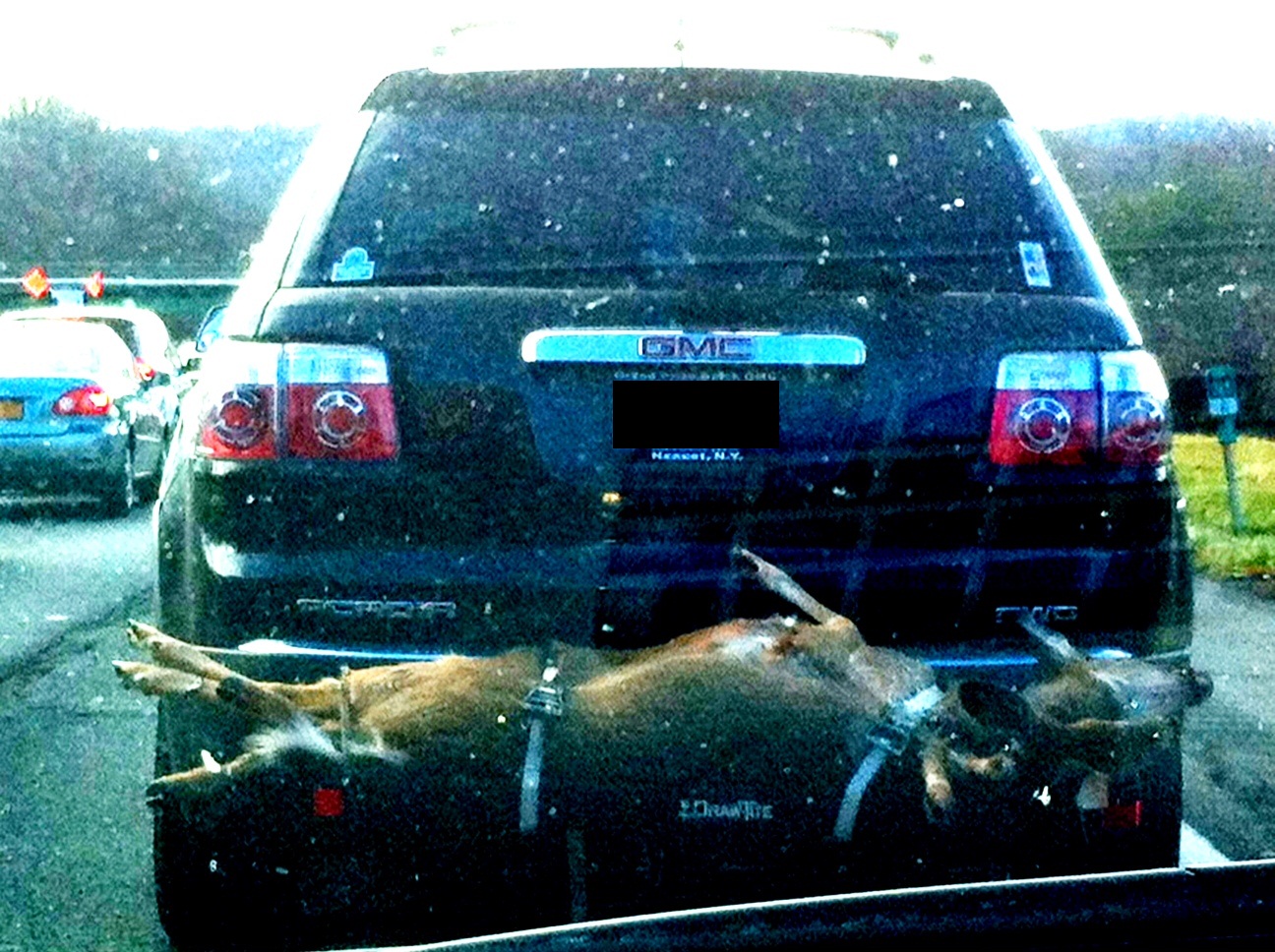 This is a view of a successful assassination of a dangerous, devious, and deadly deer (Hey, alliteration!!) observed earlier today.  How apropos that I spotted this on the 48th anniversary of another famous assassination.  President John F. Kennedy was killed on November 22nd, 1963 in Dallas.  Lee Harvey Oswald took the fall for that one, literally and figuratively.  He is not a suspect in today’s assassination.  There was a second gunman on the grassy knoll who is still at large.

I’ll continue the morbid vein for a second.  Bear with me, I have to get these thoughts out while they’re fresh.  Both the deer and JFK didn’t see their ultimate demise coming.  Both were killed by a gun shot wound.  Both were then carted off in a vehicle to be further examined.  I’ll stop now.  I’m sure there are other similarities, but enough is enough.  What’s not similar is that, while JFK was universally mourned, this deer won’t be missed by anyone.  I know, it may have family members that would miss it, but that’s also taking a big leap in assuming that deer have emotions.  We know they can’t see colors, otherwise they’d see these guys before they even left the house.  This deer (hopefully) will end up providing some tasty nourishment to a number of families, instead of having its cold dead eyes peer out from a hunting cabin wall for the next 20 years.  No one ate JFK that we know of, but people still hang his picture up almost 50 years later.  Weirdos.

I have no political agenda whatsoever when I say I’m not a gun person.  It’s not that I dislike them, I’m just not a rabid fan.  I do put my gun cabinet cardboard box out on the front porch when the threat of riots crop up in Windsor, NY, just in case, but that’s about it.  I’ve fondled a weapon or two in my day and, in all honesty, I enjoy firing guns.  There’s a visceral feeling of power that you don’t quite get with many other activities.  And it’s just fucking fun to aim at shit and destroy it.  It’s totally cathartic.  Even anti-gun people would agree if they strapped their mitt around a big-ass pistol, a la Hunter S. Thompson, and blew some shit up.

What I haven’t gotten into yet is hunting deer.  Again, I have absolutely nothing against it whatsoever, but it does nothing for me.  I appreciate the effort that goes into it, but waking up at 3:30AM to sit in the freezing cold woods for 6 hours to hopefully get a shot at a deer as it nibbles at an apple 500 yards away, isn’t exactly what I would call orgasmic.  My brother-in-law is an avid hunter and I love listening to him tell stories about his adventures in the woods.  Yet, as I listen to his hunting stories, it’s always difficult to understand where he’s coming from.  I have almost no frame of reference as to what he’s talking about, but I recognize passion when I see it and hear it.  He has it and he also has more respect for hunting and its relationship to life on this planet than anyone I’ve ever met.  Knowing him the way I know him, I’ll bet if he saw this car pictured, with the deer so unceremoniously strapped to the back in full view of everyone, he’d want to pull the guy over and say, “Dude, what the fuck?”

Damn, I just noticed something as I looked at the picture again.  I know it’s not the greatest picture, but this is actually two deer, not one.  I’m no deer expert, but those are some pretty small deer.  They look like does (female deer).  Weak, my man, weak.  You gotta go after the big buck, son, not some defenseless chick.  Even Lee Harvey left Jackie alone.